Now that I’m working a bit more than 6 months on the Atbash repositories, it is time to give you some overview of them.

For the moment, almost all of them are geared towards Java EE 7 and Java 7.

The idea is to create a MicroProfile compatible experience on Java EE 7. As much as possible of course. Since MicroProfile is based on Java 8, it is not always easy (or possible) to have an identical experience.

But the idea is to give the developers the possibility to have a “smooth” migration from Java EE 7 to MicroProfile by having all or the most important specifications, available on those servers.

This contains some code used in multiple other Atbash repositories. It is not directly related to the goal but can have some usages in any project.

– BASE64 encoder and decoder
– Utility class related to searching classes and resources on different class loaders (Current Thread, class loader of utility class or System class loader) and instantiating classes with advanced argument matching.
– Reading library or framework version from manifest file
– Check to see if an application is running within a CDI container
– Utilities related to verification and handling proxies (like determining original class)

– Creating a method expression based on the expression value
– Retrieving property values from JSF components (taking into account expressions and static values)
– Custom component finding which starts at the parent itself but then extends to the parent until found or view root is reached.

Alternative JSON-B implementation (not following the specs!) to convert Java instances to JSON and vice versa. The code is adapted from the JSON smart framework (no longer maintained) for the use cases within Atbash (see Atbash JWT support) and extended to have customizations.

The code in this repository is to support JWT (JSON Web Token, signed but also encrypted) as they appear in protocols like OAuth2 and OpenId Connect.

To support this encoding and decoding, there is also a unified handling of cryptographic keys. It is capable of reading them from a PEM file, a Java Keystore, a JWK and a JWKSet. Various encrypted formats for the Private Key are supported.

But the idea goes a bit further than just support OpenId Connect JWTs. Instead of exchanging data as JSON, why not exchange them as JWT. That way, we are not only transferring information but also make some guarantees like sender verification and end to end protection as we can detect changes through the signing.

The Atbash config is a Java 7 port of the MicroProfile Config specification and the Apache Geronimo implementation.

There is also a Config provider for testing available where the configuration values are stored in a HashMap.

Allows defining the configuration values for MicroProfile application in a central place. These applications can retrieve the values using a JAX-RS endpoint.

There is also a client implementation available which, when added to the application, retrieves the values automatically, based on the configured endpoint of the config server.

Jerry defines a JSF Renderer interceptor which allows you to perform various tasks on any JSF component.

It is the basis for a more advanced validation mechanism for JSF and the declarative security features of Octopus for JSF components.

Octopus is a large framework consisting of small artifacts that bring you every aspect of authentication and authorization for Java EE and MicroProfile applications.

The following Neo4J graph gives you an overview of the dependencies between these repositories and the relation with other libraries. Octopus is left out of the image because it would complicate it too much. 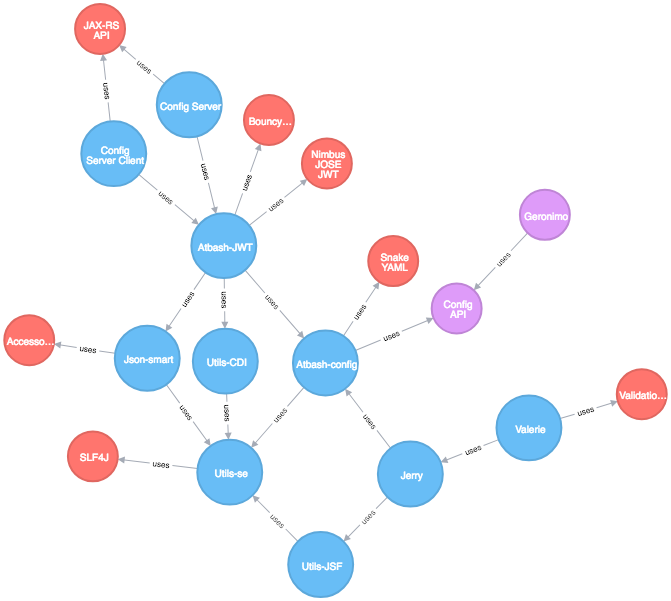