After more than a year of development and testing and 2 projects where the major new features are already used, we feel it is time to release a final version of the framework.

The theme of this release is Self-Contained Systems. (Only for Java EE 7+)

in this announcement, I want you to tell something more about the support for Self-Contained Systems (SCS).

You can see them as a variant of microServices, the important feature about an SCS is that it is responsible for the data of a certain domain (like products or orders) and that it contains all the business logic and UI to work with the data.

Interaction, preferable asynchronously, with other SCS goes through the UI of them since Web pages and REST endpoints are both considered as UI.

The image shows these basic features of an SCS. 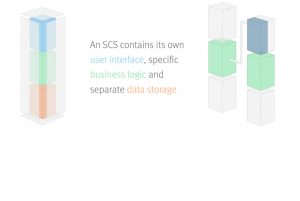 For an excellent introduction, I can recommend the site http://scs-architecture.org/

With this latest release of Octopus, implementing security within an SCS architecture becomes quite easy.

Based on the OpenIdConnect protocol, another SCS (clients) can delegate the authentication process to the Octopus SSO server. An additional scope, ‘Octopus’ makes it possible that the permissions of the authenticated user are transferred to the client.

Because permissions need to be transferred from one SCS to another, it becomes easier if these permissions are just Strings. Although a more type-safe approach like enum values, here String are more pragmatic. (example further in text)

Also, the communication with a JAX-RS endpoint can easily be secured with the SCS user modules.

The idea is that the information of the currently authenticated user is packed within a JWT and send in the header of the REST call. The server endpoint uses this info from the header, to recreate the principal and his permissions.

The normal Octopus security annotations, like @RequiredUser or @OctopusPermissions(“order:read:*”) can be used on the server side (containing the JAX-RS endpoint)
When the calling user doesn’t have the permission “order:read:*”, automatically a status 403 is returned.

On the server side, you can have something like this

The client side, for calling this endpoint can look like this

Be aware that direct calling one SCS from another results in a tight coupling which is not suited in most situations.

The user manual can be found here and example programs are created and will be available soon on GitHub.

More examples and better documentation can be expected when I migrate the Octopus framework into the Atbash organization of Github in the coming months.

The last section about compatibility with the current application servers. Some of the new features in this release of Octopus are only working on Java EE 7+.

Some of the new features in this release of Octopus are only working on Java EE 7+.
But in general Octopus framework can be used on any Java EE 6, Java EE 7 or Java EE 8 compliant server.

Yes, Octopus is tested with GlassFish 5 server and no issues are found. Just use the Java EE 7 version artifacts of Octopus and they will work just fine.

Later on, there will be Java EE 8 specific artifacts which use the JSONB api instead on the net.minidev:json-smart artefact.